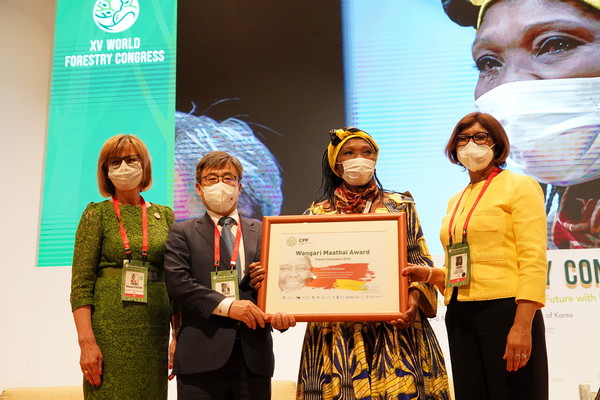 Nam Tae-hun (second from left), deputy director of the Korea Forest Service, and the winner, Cécile Ndjebet (third from left), the president of the African Women’s Network for Community Management of Forests, are taking a commemorative photo at the Wangari Maathai Award Ceremony held at COEX in Seoul on May 5.

Cécile Ndjebet, President of the African Women’s Network for Community Management of Forests (REFACOF) was on Thursday, May 5, awarded the 2022 Wangari Maathai Forest Champions Award in recognition of her outstanding contribution to preserving forests and improving the lives of people who depend on them. The award was presented during a ceremony at the XV World Forestry Congress in Seoul, Republic of Korea, by the Collaborative Partnership on Forests (CPF), chaired by the Food and Agriculture Organization of the United Nations (FAO).

In a statement delivered to news outlets, Maria Helena Semedo, FAO deputy director-general and president of the PCF, said “this award recognizes Cecile Ndjebet for her energy and commitment over 30 years to the promotion of women’s land and forest rights. As an activist, she has shown that women’s participation in forest governance and conservation is fundamental to achieving sustainable forest management.”

Ndjebet has worked tirelessly to promote the idea that women should participate in forest management and have equal rights to land. Through the African Women’s Network for Community Forest Management, which she co-founded in 2009, she has become a leading figure in Cameroon and internationally for global recognition of the importance of gender equality in forest management. Currently, the organization has 20 member countries across Africa.

Established by PCF in 2012 in memory of Kenyan environmentalist and Nobel Peace Prize winner Wangari Maathai, the Champions of Forestry Award recognizes individuals who have been inspired by her in their commitment to improve and sustain forests and the people who depend on them.

Ms Cécile Ndjebet is an agronomist and social forester by profession. As a gender specialist and women in leadership trainer and adviser, she holds a M.Sc. in social forestry from Wageningen University and Research in the Netherlands.

With 33 years of field experience, Cécile started her professional career as a Cameroonian civil servant. In 1997, she joined the civil society organizations. She is one of the well-known leaders of CSO REDD&CC platform in Cameroon, where she is a National REDD+&CC Steering Committee Member; and Regional Coordinator of CSO REDD+&CC Platform of Central Africa.

To promote women’s direct and effective participation in natural resources management in Africa, in 2009, Cécile founded the African Women’s Network for Community Management of Forests (REFACOF), a regional network within 17 countries in West and Central Africa.

In 2012, Cécile was elected Climate Change Champion of the Central African Commission on Forests (COMIFAC). At international level, Cécile is an active member of The U.N. Women Major Group and well-known advocate for women’s tenure rights within global women networks. She is also actively engaged as a Governing Council member of the African Forest Forum (AFF).