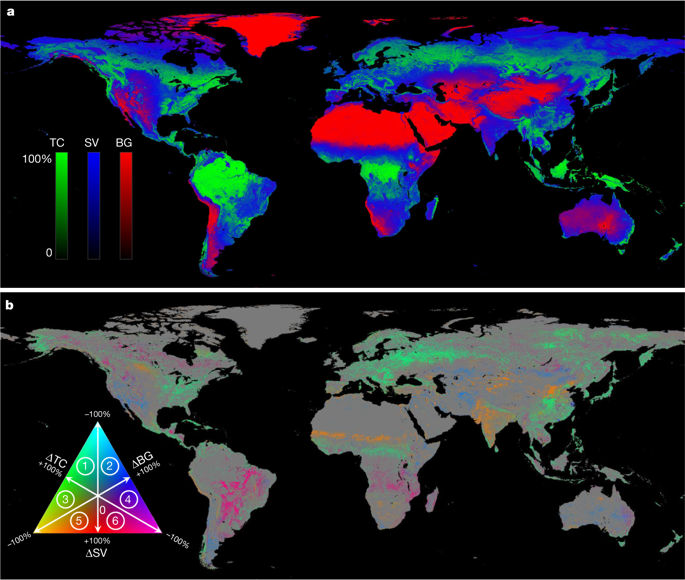 A team of researchers from the University of Maryland, the State University of New York and NASA’s Goddard Space Flight Center has found that new global tree growth over the past 35 years has more than offset global tree cover losses. In their paper published in the journal Nature, the group describes using satellite data to track forest growth and loss over the past 35 years and what they found by doing so.

To track global tree cover changes, the researchers studied data from advanced very high-resolution radiometers aboard a series of 16 weather satellites covering the years 1982 to 2016. By comparing daily readings, the researchers were able to see small changes occurring regularly over a relatively long period of time—which added up to large changes. Over the entire span, the researchers found that new tree cover had offset tree cover loss by approximately 2.24 million square kilometers—which they note is approximately the size of Texas and Alaska combined.

The researchers report that most of the new tree cover occurred in places that had previously been barren, such as in deserts, tundra areas, on mountains, in cities and in other non-vegetated land. They further report that much of the new growth came about due to efforts by humans (such as reforestation efforts in China and parts of Africa) and because of global warming—warmer temperatures have raised timberlines in some mountainous regions, and allowed forests to creep into tundra areas. Other areas of new tree growth resulted from large farm abandonments in places like Russia and the U.S. The researchers report that their calculations showed that human activities have directly caused approximately 60 percent of new global tree growth. They suggest their technique for monitoring tree cover could be used to predict tree cover changes in the future due to global warming.