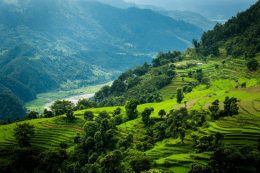 For those efforts to be effective, it is important to understand who is involved at each level and in every sector, and how they interact, say scientists from CIFOR, who have conducted research about such multi-level governance.

“Land use and land-use change happen in a geographic space that is affected by multiple levels of decision making,” says senior scientist Anne Larson, who heads CIFOR’s Equal Opportunities, Gender, Justice and Tenure Team. “You can’t talk about land-use change or climate change adaptation and mitigation if you don’t take into account all levels, from the global to the ground”.

That means that local and regional governments, as well as local communities, have an important role to play in REDD+ (Reducing Emissions from Deforestation and Forest Degradation) initiatives – or other, similar efforts, Larson says. “There’s a lot of talk at climate negotiations about bottom-up planning, and that must be done below the national level” she adds, “We can’t expect global decisions to have an impact if we don’t have sub-national governments that can implement and manage plans in local jurisdictions”.

That assumes coordination among various groups with different interests. Depending on the place, they may include government agencies (with different sectoral priorities), private companies, local communities and non-governmental organizations. But sub-national coordination is easier to discuss than to implement, according to researchers who are conducting a global comparative study on REDD+.

“Donors who finance climate initiatives tend to think about coordination with multiple stakeholders as though it were like assembling a jigsaw puzzle, when it’s really more like a poker game”

One obstacle arises when governments are only partly decentralized. This invariably leads to subnational governments who have “authority” but without resources to carry out their mandate. In some cases, national governments are reluctant to give up control to local or regional governments, even when power-sharing is established by law. In Mexico, the federal government maintains a great deal of decision-making power over forests — something that must be considered when implementing programs at a local level.

Another risk is that local or regional governments could favor the interests of economically powerful private companies over those of local communities that depend on forests for their livelihoods. But in the same instance, local governments may be more willing to protect their interests as they are often more responsive to their citizens.

When there are tensions among stakeholders, it can be tempting to do top-down planning that focuses on technical solutions and faster results. But when that was done in Central Kalimantan, Indonesia’s REDD+ pilot province, local people felt that they were “guinea pigs” in an experiment instead of active participants, studies found.

Processes that ensure the involvement of local people, instead of seeing them as “beneficiaries,” and that protect the rights of forest-dwelling communities may take longer and be more complex, but the outcomes are often more equitable, according to research conducted in Vietnam. In many places, local communities — especially women, young people and indigenous people — have been marginalized from decisions. Giving them a central place in decision making builds their negotiating skills and can create new local venues for discussing local issues, the researchers say. “When decision-making is done at a sub-national level, transparency and accountability are key”, Larson says. “That requires monitoring, but the kind of monitoring depends on your goals”.

The SLRT was developed by the Climate, Community & Biodiversity Alliance and is being used by jurisdictions belonging to the Governors’ Climate and Forests Task Force. Aimed at fostering governance policies for sustainability, the tool is mainly designed to assess the enabling conditions required. Its success depends on the availability of the information required by each indicator, which can be an obstacle in jurisdictions where data are lacking.

The Multilevel Governance Monitoring Process (MLGMP) grew out of scenario-building processes that assessed carbon emissions in eight landscapes in four countries. The prototype was designed in Peru’s Amazonian Madre de Dios region, where land-use planning and governance is complicated by social conflicts related to overlapping land claims by loggers, miners, farmers, tourism operators and others.

The process brought people together to develop a shared vision for the future and set goals for working toward it. In Madre de Dios, representatives of seven government agencies participated in workshops to identify potential indicators and strategies for monitoring, but the process was hampered by lack of commitment by key regional government officials.

A similar process in Mexico involved national and sub-national government agencies, as well as civil society groups, donors, community representatives and researchers. At workshops in the Yucatán and Chiapas, participants identified and prioritized challenges to good governance, set goals and agreed on indicators for measuring progress.

The tool can be adapted to local needs and priorities, but participants said the one-day workshops were not sufficient to work out details, including how the monitoring would be implemented and by whom. The workshops also revealed differences in levels of participation by women, which should be addressed in monitoring, the researchers said.

A third tool, the Participatory Governance Monitoring Process (PGMP), was designed to better involve local people in forest governance and strengthen women’s participation in decision making in their communities. It was developed as part of a research project in indigenous communities and territories in Nicaragua’s North Caribbean Coast Autonomous Region.

Participants gathered together to decide what ‘good governance’ was. Characteristics such as a strong community, good leaders, more participation by women and good forest management were agreed, before a series of ‘yes-or-no’ questions determined whether the requirements were being met.
Using the questions as indicators, the results informed a tool that builds local community participation into both planning and monitoring, says Sarmiento. “This can be used to determine the degree of local participation, especially by women”.

The three tools have different purposes, and the best to use in a particular case depends on the local situation and specific monitoring goals, Larson adds.

At the Paris climate summit in 2015, countries made commitments to reduce the emission of greenhouse gases. Those commitments, known as Nationally Determined Commitments (NDCs), will be used to measure their progress toward their targets.

In countries whose NDCs include reducing emissions by controlling deforestation and forest degradation, sub-national governments must play a key role, Sarmiento says.Nevertheless, countries with REDD+ commitments do not always highlight the importance of sub-national governance in their NDCs. Of the 60 countries that have REDD+ programs or strategies, only 39 mention sub-national governments. Of those, 21 define a specific role for them, but in only seven NDCs is that a decision-making role, according to a CIFOR study

“This could be a missed opportunity,” Larson says.  “Climate negotiators hail the Paris agreement as a ‘bottom-up’ accord, but what they consider to be the bottom is usually the national level,” Sarmiento says. “Implementation won’t work without attention to sub-national governance.”

Research like the CIFOR studies reveals both the difficulty of bringing stakeholders from different sectors and levels of government together. They also unearth the opportunities offered by participatory approaches that enable local communities to make decisions together with sub-national governments, with the goal of ensuring equitable solutions for forest dwellers.

“Governance always has a local flavor to it,” Sarmiento says. “That is why its monitoring needs to be informed by local people’s practices and their perceptions of what it means to govern well.”

The post Global climate action is nothing without local backing appeared first on CIFOR Forests News.

Global climate negotiations take place on the international stage, bolstered by countries’ national policies. But preventing greenhouse gas emissions from deforestation and other land-use changes requires work at the local level. For those efforts to be effective, it is important to understand who is involved at each level and in every sector, and how they […]
The post Global climate action is nothing without local backing appeared first on CIFOR Forests News. […]
Read More