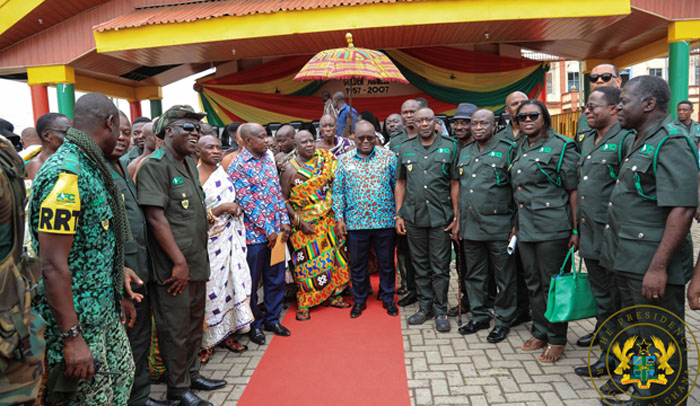 PRESIDENT Nana Addo Dankwa Akufo-Addo says it is his hope that Ghana will be green again in the next 10 years, God willing, as all the trees which are being planted today will be nurtured to grow and increase the forest cover and help the nation also to reduce emission from deforestation and forest degradation. According to him, the existence of Ghanaians will be determined by what “we make of our natural resources,” for which his government will support every action that prevents forest degradation and deforestation as well as an act that increases the nation’s forest cover.

Speaking at the launching of Youth in Afforestation Programme in Kumasi, President Akufo-Addo stated that the government’s fight against illegal mining popularly called ‘galamsey’ would continue unabated. He indicated that the youth in afforestation programme was crucial to the realization of Sustainable Development Goal (SDG) 15 “which requires us to protect, restore and promote sustainable use of eco-system to enable us manage forest, combat desertification, halt and reverse land degradation, and halt biodiversity loss.” The President said he was also aware that, as a co-chair of a group of advocates of imminent persons of the United Nation’s Sustainable Development Goals, the reduction of emission from deforestation and land degradation is at the heart of SDG 13.

“It requires that we take urgent action to combat climate change and its impact,” he reiterated and urged all the people who have been employed in the programme to be diligent in the discharge of their duties. “All the trees you are planning today will go a long way to save our lives and lives of generations unborn,” he noted. President Nana Addo disclosed that in the 2016 manifesto of the NPP, they indicated strongly the party’s commitment to reforestation, forest rehabilitation and forest protection activities, after realizing that the forest cover has been significantly depleted in the last few decades. “That is why we are deploying an army of some 20,000 people to restore our degraded forest. The programme, which has an initial two year-life span, will be extended based on satisfactory result. I’m confident that the first phase will be a success,” he asserted confidently. He indicated that Government had already begun the preparation for the second and subsequent phases, and that a total of 60,000 applications were received for the programme with only 20,000 spaces on offer.